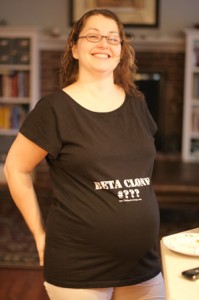 There is no other way to say it. I love to read, but some years back found myself with not a lot of time to actually sit still with a bound and printed dead tree and read – hello parenting. I eat books. I read lightening fast, and even the last Harry Potter book of 759 pages didn’t take me but under 2 days to read.  Sci-fi and fantasy are a favored genre but strangely enough I haven’t even picked up a Twilight book yet.

Years back, I was (and still am) a huge fan of Podcast Pickle (a podcast directory years ahead of iTunes.) The community was buzzing about ‘one of their own’ producing an original book, released in serialized audio format.  7th Son by J.C. Hutchins had been hitting podcasters and listeners by storm.  I had never been a fan of audio books, because honestly the person reading the book doesn’t convey the passion that only (in my opinion) the person that wrote the book can provide.  Besides, you can’t peek at the ending of an audio book, and you can’t consume it any faster than it is read to you.

In the first four minutes of the very first 7th Son episode, my head was reeling, I was in love with the voice and the story.  I joined the party at about the fourth or fifth episode – so I’m not really an ‘original’ listener, I jumped in after the series had already started up.  Didn’t stop me from being a crazed fan (note picture, I was 7+ months pregnant in the photo and had designed my own “Beta Clone #???” tee because the official seller of the shirts couldn’t make me a maternity one!)  Every cliffhanger had my heart beating in my throat, every death of a character had me in tears (no spoilers here I promise.)  It was a long, gorgeous, plot-twisting, wonderfully read, outrageous cleaver, and dangerously possible of happening in the near future – story that had me telling everyone I could about the series.  I would copy a few of the first episodes on a CD, write the website on the disc with a Sharpie, and hand it out to friends.  Every update the author would give on how more and more listeners were finding him and loving the work would make me feel like somehow I had personally contributed to it.  Hutch made it *our* story.

Radio silence to a degree after the third audio book had finished up, filled by interviews with other interesting authors and people, as well as a bit of behind the scenes info on how Hutchins was doing on his quest for a print deal.  I won’t lie, I was a little disappointed to find out that the first book deal to get to print was not 7th Son, but Personal Effects : Dark Arts.  PE:DA is an amazing story, complete with phone numbers to call, blogs to visit, birth certificates and photographs to gain clues and insight into the characters lives (even if fictitious.) It gave me nightmares…ktktktktktktktkt… Truth be told, I wanted *my* book, all of three of them, to be printed in one big huge fat hardcover so I could eat it for dinner.  After a reality check, I knew success had been long-earned by Hutch, and this only meant that more people would find his work and buy whatever he produced.

And. Then. The. Bombshell. Hit. When J.C. announced he had landed a book deal with St. Martin’s Press for the 7th Son Decent book, I nearly fainted.  I pre-ordered the book.  I intend on buying more than a few copies in person at the local bookstores & giving them to friends.  And, by some amazing stroke of luck, I will get to meet J.C. Hutchins in November at a conference we are both attending and speaking at.  My husband has been warned – I will be a freak of nature and a babbling idiot when I finally get to meet Hutch and tell him how amazing he is.  I tell him all the time on Twitter (and, no, I’m not a crazy stalker, at least I don’t think I am.)  There is just something so amazing about being able to SEE him after years and years of HEARING him that is honestly outside of my ability to form into words.

As far as I’m concerned, it’s just as much my job to help publicize him as it is his, and the publishers.  The only way I’m going to get what *I* want is to help make it happen myself.  I want lots and lots of book signing tours.  I want 7th Son to hit the top of the bestsellers charts.  I want all three 7th Son books in print.  I want all three 7th Son books made into movies.  I want Hutch to have more money and success than he ever thought possible so he can sit home on his ass and write more books for me.  For my own profession, I do a good number of talks and seminars, and I have actually written in a bit of a case study about the 7th Son phenomena and how the fans truly make the difference.  I tell all the attendees to buy his book, to download his audio book series.  I tell them all that with amazing talent and social media, anyone can kick start their own grassroots dream. I tell people I see browsing in the aisles in the bookstore, or the girl behind the coffee counter.  I tell old school friends.  I. TELL. EVERYONE.

How many things in your life can you say drive you with such passion that you would put your own agenda aside and promote someone else?  I am thoroughly convinced that there has been no *better* time to be a creative person than right now.  With the web being the way it is, the socialness of it, the lower technical point of entry, the ‘click here to add a widget’ ease of it all – that if you have the talent, desire, and heart, you can make it happen.  You and maybe 10,000 of your biggest fans.  I believe with all my heart that Hutch has that going for him.

7th Son Decent by J.C. Hutchins hits bookstore shelves on Tuesday October 27, 2009 in the United States.  His amazing journey has just begun after years in the making.  You really need to be a part of this.

Podcast pug gets an operation

It’s All About the Glitter Baby!!