I Love You… I Know 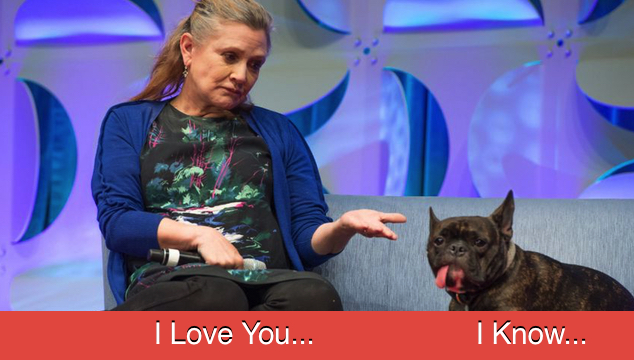 I have no words. Carrie Fisher has died at the age of 60. She, and the most notable character she played, Princess Leia (and then GENERAL Organa) have had an immeasurable impact on my life.

Star Wars “A New Hope” was released in the United States on May 25, 1977. I had *just* turned six years old. My babysitter took me to see the movie **26 consecutive** Wednesday afternoons. It was only on that afternoon that the theater offered $0.50 movies. The theater was air-conditioned – and my apartment wasn’t – so we went to the movies. To date, I’ve seen A New Hope nearly 100 times.

Leia was a princess with a blaster that sassed the men around her that were trying to push her around. As a kid, there was no way I could to it, but I fully intended to grow up to be a woman that COULD.

That movie literally shaped my childhood and my entire personality.

The actress that played Leia, Carrie Fisher, had a lasting influence on me as well. She battled nearly everything and came out the other side on her own terms – and still sassy. Still fighting.

Her little companion dog Gary breaks my heart he’s so sweet. Awhile back he even liked one of my Tweets almost a year to the day (December 23, 2015.)

One thing I’ve loved in her more recent years is her ability to speak her own truths out loud. I’m not talking “say whatever comes to mind,” but rather lay out her own life for all to see, and flipping off anyone that thought they had the authority to give their opinion on it. She had addiction issues and mental illness and accepted them both. Fought them both. Managed them both… because she knew she couldn’t “fix” them.

Thanks, @carrieffisher for teaching me that girls like us can be princesses, generals, or whatever we want to be. #RIPCarrie pic.twitter.com/VHuKIW5ymV

@carriefisherofficial has passed away and I'm crushed. My husband and I share rings… mine has Princess Leia's line of "I love you" and his says Han Solo's line of "I know". We ALL love Carrie.

A lot of people are calling all of these deaths the ‘curse of 2016’ but it won’t end when the clock ticks midnight. I see people saying “it’s just the same as all the other years” and to me, that profoundly disrespects and cheapens the impact of sadness this year has had on so many people.

I will say losing Carrie has absolutely been the most devastating celebrity loss to me. Maybe ever.

In my head I can hear the famous Star Wars scene between Leia and Han “I love you…” and “I know.” Now I hear US saying “WE LOVE YOU” to Carrie and her answering through the stars “I know…”