Podcasting Crew From Days Gone By

I was very sad to hear an old podcasting friend Garrett Husveth from the Haunted New Jersey podcast passed away this week. I have been spending a lot of time lately going back over old connections & friendships from 2004-2005 and my early days of my podcasting in and around the Garden State.  Garrett and I (and a bunch more friends – Steve, Bob, Brad, Rob, Todd, Harold, Anya, Gene, Annie, Chris…) were all the beginnings of the New Jersey Podcasters Association.  It was 6-7 years ago, but it honestly feels like a lifetime. 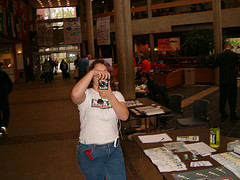 Flipping through old pictures on Flickr really makes me feel how long it’s been since 2004.  I found an old picture of all of us at a NJPA meeting (I took the picture, evidence of my attendance by my purple file folder in front of my chair).  It was Garrett’s office we would meet at and leave pizza boxes all over.  Our group did all sorts of cool things back then.  Bob interviewed Greg Olsen (astronaut) – we all thought that was totally ‘the shit’ to interview a famous person.  We got a table at the local college computer fair and made it our mission to educate fellow geeks (especially the local Star Trek fan club) about podcasting.  We had cool stickers and tons of podcasting gear.  We took over our local Panera’s with mixing boards and microphones and laptops – and ate every byte of the free bandwidth.  (I’m certain we are the reason why they have limits on how long you can suck their Internet feed without getting kicked off.)  We tried our hand at a two-way Skype meetings so our members wouldn’t have to drive so far to ‘hang out.’ We published podcasts of our interesting-only-to-us meeting and gossiped endlessly about download statistics or how much money was going around in sponsorships or advertising.

Anya (Brad’s teen daughter), Annie & I were the only female podcasting members, unless you count Chris’ then-girlfriend that hung around with us & hated podcasting.  It was a man’s world for sure, and being a woman in the space wasn’t hard (as long as you could hold your own technically) – and helped you stand out from the rest.  Now the market is brimming with content and competition, but back then it was wide open spaces and blue skys everywhere.  It was creative, geeky, and rewarding.  Most of all it was FUN.

Anyhow, looking back and thinking about Garrett made me smile.  The path we have all taken is so very different from each other.  I’m glad for those of us that are still here, mourn for those that aren’t, and hope for easy travels for us all.  Thanks Garrett for your friendship back in the early days.  We all needed each other to become what we are today – you will be missed.

EDIT – Hometown Tales put up a podcast in dedication to Garrett.

Staying Solo or Selling Out?

Why SOPA and PIPA is the wrong choice for my country

Days like these I wish for a warm vacation