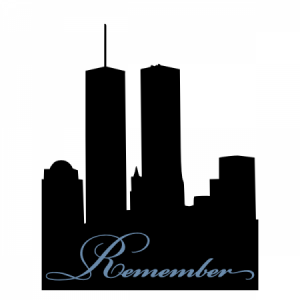 I spent September 11, 2001 at home with my newborn daughter and husband who should have been at work that day in a building across from the World Trade Center in New York City. He stayed home with me ‘just one more day’ to help with a colicky newborn. Up early feeding the baby, I usually sat myself in the recliner watching television to pass the time. I don’t even remember what I was watching before the news station cut in and announced a plane had crashed into one of the towers. Once I realized where and what building it hit, I ran to get my husband up. We watched together as the second plane hit. And the third in DC. And the fourth in a field in Pennsylvania. Now I remember every minute of every day for the weeks that followed.

My husband spent the day split between watching television with me and chatting online with the spouses of old co-workers looking for some information on their husbands. Sadly none of the news would be good. Based on when the planes hit and the towers fell, my husband would have lost his life beneath the buildings on his way to work. It took years before either of us were comfortable working in New York again.

If he had been at work that day instead of home with his family, chances are things would be very different in my life right now.

This past Friday our daughter came home from school anxious to tell us about everything she had learned in school about the 9/11 attacks. She decided to tell me this in the car on our way out someplace, and it took every ounce of strength I have not to break down and cry in the car.

“Mom, did you know that planes hit the two big buildings and killed people in the planes and at their jobs?”

“Mom, did you know there was a forth plane that crashed in Pennsylvania and those people took back the plane from the terrorists and were so brave to crash the plane all by themselves instead of hurting others?”

“Mom, why would someone want to hurt all those people?”

Yes. I know. I know that it happened. I saw it on the news, and saw the smoke outside myself. I lost friends. I know why people want to hurt others, too, but I don’t want to tell her all of it. Not yet. Not at 10 years old. Not ever, but this isn’t possible any longer.

I know why I haven’t sat her down and talked to her specifically about the attacks. It has existed her entire life. This is her status quo. It is too hard for me to speak out loud. I don’t know what I will do tomorrow, the 10th anniversary of the attacks. None of this is about me, it is all about my two kids at this point. Teaching them to honor and remember something that they have no memory of — but I do.

Ten years later we look at our smart and beautiful 10 year old daughter and our (almost) 4 year old son with amazement and thanks – and know if my husband had not skipped work that day our son wouldn’t even exist.