BlogHer was pretty fun as far as girls-weekend-out goes. 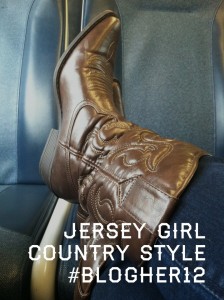 My way in on the NJ Transit train. Although I was approached by  someone that did not align with my fashion (non)sense and told me my boots didn’t match the dress I was wearing… I completely LOVE cowboy boots. In my early 20s I had a pair of white boots I wore into the ground. I’m working on saving $700 (UH WTF? Not really) some cash to pick up a proper pair of brown & purple yeehaw cowgirl boots. Yes, I live in New Jersey. So what??! 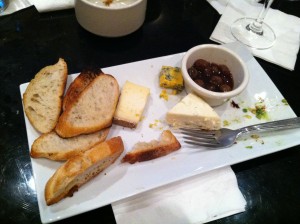 Delish nibbles from the hotel lobby at Hilton NYC. I would eat cheese and give up chocolate. Well, not that stuff that comes in individually wrapped plastic slices and is weirdly smooth. So total props to the Hilton for having at least a decent selection on the bar menu. Not pictured: vodka martini’s, dirty, three olives. IN MAH BELLY. 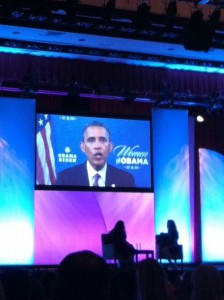 A live address for BlogHer from President Obama (blew my mind…) So like really? I get that it’s an election year. But you know what? He has a wife and two daughters. I really think he GETS the fact that our room of 5,000 women bloggers and millions across the country and the globe are bringing a powerful voice to world. And not just for free swag and shit. FOR REAL ISSUES. So anyway Mr. President, you rock. Next time we want Michelle <grin>. 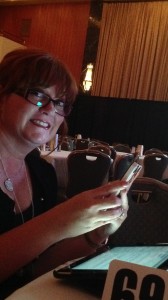 Marcy and I catching up on work type things before the Martha Stewart keynote. She works a lot, so the only chance I get to catch up with her is to sit next to her & talk as she checks 100 different mobile devices for emails and client stuff. She’s wicked smart and works on the biz side of things like I do (she’s an agency gal though, I’m still on my own.) 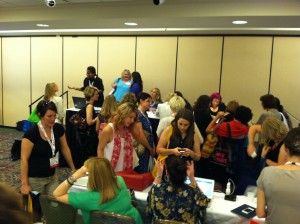 The stage rush that happened after the How to Value and Price Your Services panel. They all said uber smart things. I’m glad the room was not only packed, but had to be opened up to the room behind it to hold overflow. That much smart in one room may have imploded, it rocked. 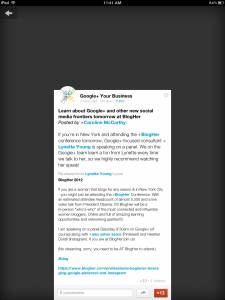 Quick little screencap from the Google+ Your Business page promoting my Google+ panel at BlogHer.  Yes, it’s a ‘real’ Google page run by Googlers. (Psst – keep an eye out on them for some more stuff from me….) I’m a total fan of Google+ – mostly because the community there is amazing, but a good part is because as a businesswoman, I see what can be accomplished. 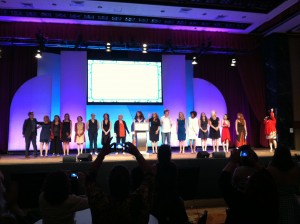 Voices of the Year – two friends were nominated – Dresden (she spoke on the stage) and Liz. They both blow my mind. I am biased of course because of the 15 women that I actually knew at BlogHer, every one of them is the best and smartest woman on the planet. 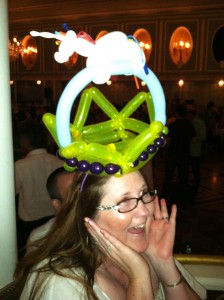 Erin (Queen of Spain) showing BlogHer how to rock a balloon unicorn crown. ONLY she could pull this off. She also strutted her sexy self down a fashion runway. She’s got more guts than I do for sure! 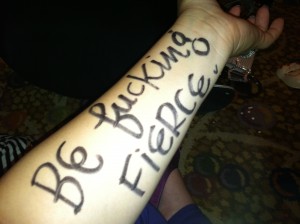 My awesomesauce Sharpie tattoo from Robin. I loved that she asked if she could curse on my arm – UH YES!!! 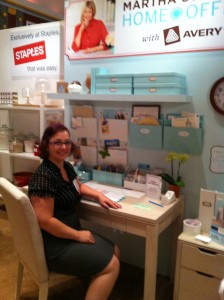 Me, eyeing up new office furniture at the Martha Stewart booth. Seriously, I need new furniture. I just built out a new office in my house and was going to hit Ikea. The colors here are a bit off from what I’d pick, but it is nice stuff.

Realizing I’m closer to this than I’d care to admit. They handed out a nice little sample pack of hot flash wipes and I wound up giving them all out to girlfriends. Yeah, we are so the right ‘demo’ for this… 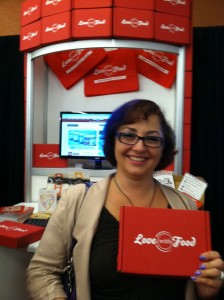 A box a month club Love With Food that sends delish little food samples to try out & donates to charity. (I love to visit the small booths, every single one of them was staffed by the company owner!) 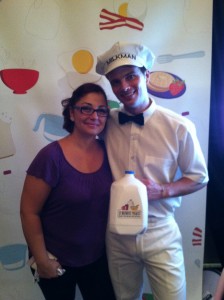 Got Milk? and their adorable milk men… so next time I’ll give them our room number and they can come up and bring me cereal in bed (with milk of course) and BACON.

Another book bites the dust…and other misc. updates